A first trimester ultrasound (performed between 11 and 13 weeks), has become a commonly requested ultrasound in pregnancy. This ultrasound is sometimes referred to as the 12 to 13 weeks ultrasound or the nuchal translucency ultrasound.

This ultrasound is often performed in order to provide you with an indication of your risk of having a baby with Down syndrome, but has other benefits (discussed below).

Do I have to have a screening test for Down syndrome?

What is Down syndrome?

Down syndrome can be detected prenatally by analysing the chromosomes of the fetus; this is done by performing an amniocentesis or Chorionic Villous Sampling (CVS). Unfortunately, both of these procedures have an increased risk of miscarriage associated with them. Screening tests have been developed in order to better identify those people most at risk of Down syndrome.

Why does my risk of Down syndrome increase as I get older?

The age of the father is less important as sperm is made throughout a man's adult life.

What does the screening test consist of?

At present the most accurate screening test for Down syndrome is referred to as the combined first trimester screening test. The test has two parts:

The blood test is referred to as the first trimester maternal serum screening test. This blood test measures two proteins within the mother's body which are secreted by the fetus. These proteins are PAPP-A and βhCG. These proteins are secreted by normal pregnancies and by Down syndrome pregnancies, but in different ratios. It is necessary to know the exact number of weeks of pregnancy, in order to analyse this ratio properly. For this reason, the blood test cannot be performed in isolation and must always be combined with an ultrasound. By combining the blood result with the ultrasound it is possible to calculate a risk of Down syndrome.

The blood test can be performed from 9 to 13 weeks but is best performed at 10 weeks of pregnancy. This is the most accurate time for the blood to be analysed, it also means that a result will be ready by the time you attend for your ultrasound.

The blood test is performed by the Victorian Clinical Genetics Services (VCGS). Your doctor would provide referral to have this blood test performed at around 10 weeks. The blood can be collected at most pathology collection centres. You will be charged a fee by the VCGS for analysing the blood.

An ultrasound is performed in order to measure the nuchal translucency; this is an area of fluid in the skin on the back of the baby's neck. All babies have some fluid in this area, but excess fluid has been associated with an increased risk of Down syndrome and other chromosomal abnormalities. This area of fluid is transient and disappears later in the pregnancy for normal fetuses as well as Down syndrome fetuses. For this reason, the area of fluid is best measured between 11 and 13½ weeks of pregnancy. 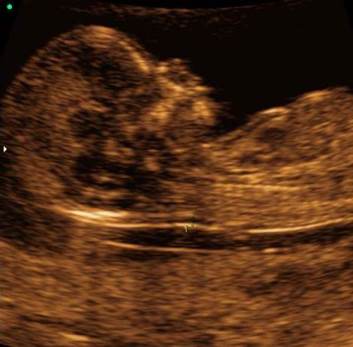 It is often technically very difficult to accurately measure the nuchal translucency. The measurement needs to be taken in a very precise fashion in order for the results to be accurate. There is a training and accreditation programme administered by the Royal Australian and New Zealand College of Obstetricians and Gynaecologists (RANZCOG) and originally developed by the Fetal Medicine Foundation (London). This training programme consists of a series of lectures, assessment of images and a practical examination. Patients considering having the nuchal translucency assessment should ensure that the ultrasound practice which they attend is involved in this accreditation program.

All of the staff working at Specialist Women's Ultrasound have undertaken this training programme and are involved in ongoing accreditation. Dr Bethune is one of the RANZCOG clinical examiners for this program for the state of Victoria.

How accurate is the combined first trimester screening test?

Data from women in Victoria has demonstrated that the combined first trimester screening test can detect at least 90% of babies with Down syndrome. This is provided the test is performed by a person specifically trained and accredited to take the measurement.

If the combined screen finds an increased risk of Down syndrome or other chromosomal abnormalities you would be offered a CVS or amniocentesis.

What does a "low-risk" result mean?

This means that your risk is less than 1 in 300. One in 300 has been defined as the cut-off between high and low risk. This approximates the risk of a 35-year-old woman having a baby with Down syndrome.

If the combined screen finds a low risk then no further testing is recommended. It is important; however, to realise that this is a screening test only and that a low-risk result makes Down syndrome much less likely. The screening test is not able to rule Down syndrome out entirely.

What does an "increased risk" result mean?

An increased risk result is defined as a risk of Down syndrome equal to or more than 1 in 300. Even if the result is as high as 1 in 100 it is important to remember that this level of risk means that there is still a 99% chance (99 in 100) that the pregnancy does not have Down syndrome.

Many patients who have an increased risk result, wish to know definitely if the pregnancy is affected by Down syndrome. The only way to know 100% is to perform an invasive test such as chorionic villous sampling or amniocentesis.

It usually takes less than one hour to combine the ultrasound results with the blood test results. Our Genetic Counsellor will phone you with the combined risk results. If required, the results can generally be faxed to your referring Doctor within 1 hour of completion of the test.

Are there other reasons to perform the first trimester ultrasound?

Modern ultrasound machines are able to provide excellent views of the anatomy of the fetus, even at this early gestation. An ultrasound at this stage of pregnancy has other benefits. It can:

Do I need both a blood test and the ultrasound?

Some people choose only to have the ultrasound and not have the blood test component. This is less accurate than the combined screen with detection rates quoted around 75 to 80%.

How do I get more information about the first trimester screening test?