Who may be offered chorionic villous sampling?

Why perform Chorionic Villous Sampling rather than amniocentesis? 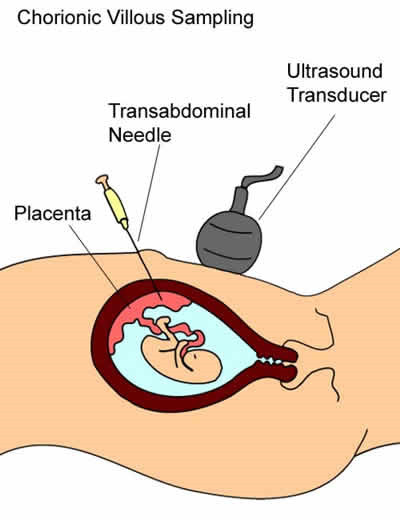 What is a CVS?

Chorionic villous sampling (CVS) is a test performed to assess the chromosomes of the fetus. It involves performing an ultrasound and then using the ultrasound to guide a needle through the mother’s abdomen. A very small amount of placental tissue (chorionic villous) is withdrawn. This is sent to a specialised genetic testing laboratory. The placental tissue is grown in an incubator until there are sufficient cells to analyse (this takes approximately 10 days). 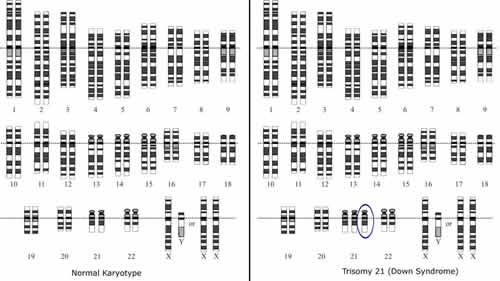 What is the FISH Test?

FISH stands for Fluorescence In Situ Hybridisation. This is a special test which can be performed on uncultured amniocentesis or CVS samples. The result is usually available the next business day. Unfortunately this test does not attract a Medicare rebate and the laboratory will issue an extra charge for performing this test. The test does not detect all chromosomal abnormalities; this FISH test specifically looks at chromosomes 21, 18, 13, X and Y. This enables the FISH test to detect most of the common chromosomal abnormalities, particularly Down syndrome. The FISH test is also able to determine the sex of the baby.

If the FISH test returns as abnormal, then this does mean that there is a chromosomal abnormality present.

When the results are ready, the laboratory will send these results directly to your doctor, who would usually communicate them to you. It is possible to definitively determine the sex of your baby from the karyotype result.

What to expect on the day?

An ultrasound is performed before the procedure to ensure that it is appropriate and possible to perform the CVS. The size of the fetus will be measured. The position of the placenta is mapped. Some fetal abnormalities may be visible at this stage.

Most people say that the test is not much more uncomfortable than having a blood test from your arm.

If you have a Rhesus negative (Rh-ve) blood group then anti-D would be issued after the procedure.

What should I do after the procedure?

Although you are able to drive yourself home after the test most people appreciate having somebody with them to drive them home. Some patients will experience discomfort where the needle was inserted; Panadol®, Panadeine® (or other paracetamol based analgesia) or a warm pack may provide symptomatic relief. Aspirin based or non-steroidal analgesics are not advised (for example: naprosyn®; ponstan®). It is recommended that you take things quietly for the next two days. You may request a medical certificate, if necessary. After this you may return to normal duties.

Are there any complications from having a CVS?

The risk of causing a miscarriage from a chorionic villous sampling is quite low, no worse than 1 in 500.

Dr Bethune has had extensive experience in both amniocentesis and chorionic villous sampling and was trained by one of the pioneers of invasive fetal procedures; Associate Professor Lachlan deCrespigny. Dr Bethune performs a large number of these procedures each year and is involved in teaching these procedures to obstetricians who choose to further specialize in the field of prenatal diagnosis through his commitments at the Mercy Hospital for Women.

Bleeding is a rare complication after chronic villous sampling, any bleeding that is more than slight spotting should be reported to your doctor.

On rare occasions the laboratory is uncertain as to the significance of a result which they have obtained. The result could be a normal variation or could be a true abnormality. In these circumstances, we would arrange for a blood test from yourself and your partner and occasionally a second procedure such as amniocentesis is required. We can arrange consultation with a geneticist if there is uncertainty as to the significance of the findings.

Although extremely rare; it is theoretically possible that the placental tissue does not grow properly and that the laboratory is unable to obtain a result. In these cases, a second procedure is offered (Amniocentesis, performed after 15 weeks).